VEnvirotech, the Spanish biotechnology start up, the finalist project in the awards 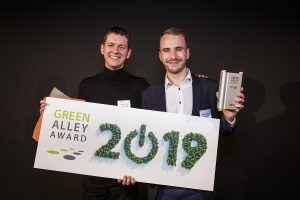 Gelatex Technologies of Estonia won the Green Alley Award 2019. The winning idea is a gelatin-based alternative to conventional leather. The jury was particularly impressed with the high level of innovation of the Gelatex Technologies product. The ecological alternative to leather is made from low-value jelly wastes from the meat and leather industries. The textile is produced without the use of toxins and is organic and biodegradable. The ability to customize the thickness and texture makes Gelatex attractive to both the textile and the automotive industry.

Märt-Erik Martens, CTO of Gelatex Technologies, explains the added value offered by the idea of ​​the circular economy: "With Gelatex we want to offer an alternative to leather that is greener and more affordable," he says. "The Green Alley Award supports our ecological approach: sustainability plays a key role in the circular economy and we are delighted to have been able to convince the jury with our idea."

The Green Alley Award is the first European startup award for the circular economy. Landbell Group has been rewarding startups whose ideas help make the sector more sustainable since 2014. In 2019 it received entries from 274 startups in more than 30 countries, with commercial models in the areas of digital circular economy, recycling and prevention of waste. In September of this year, Landbell Group nominated six finalist  Cellugy , LivingPackets , RMF Tech , VEnvirotech , Flustix (Winner of the Crowd Award 2019) that proposed ecological alternatives to conventional materials or biodegradable packaging. "Startups are important actors in a sector that is increasingly striving for innovation," says Schulz. 'Gelatex Technologies has not only developed an idea, but something with great market potential.'